The World Ageing Festival presents three exciting care movies from Japan. Don't miss this unique opportunity to watch the movies, subtitled in English, for a unique insight into working in the care sector in Japan. The movies will only be screen live as scheduled only, and no replays will be available.

What is a "Care Nin"? It refers to anyone who is involved ― with pride, love, and passion ― in the field of care, such as caregiving, nursing, and medicine. Frequently associated with the image of the "3D's ( Difficult [kitsui], Dirty [kitanai], Dangerous [kiken])", care work is both a physically and mentally demanding profession. But long-time care workers are proud to claim that there is no other job that is as rewarding as theirs as it lets them engage with people, heart-to-heart.

“Live” Only Screening Dates – No Replays 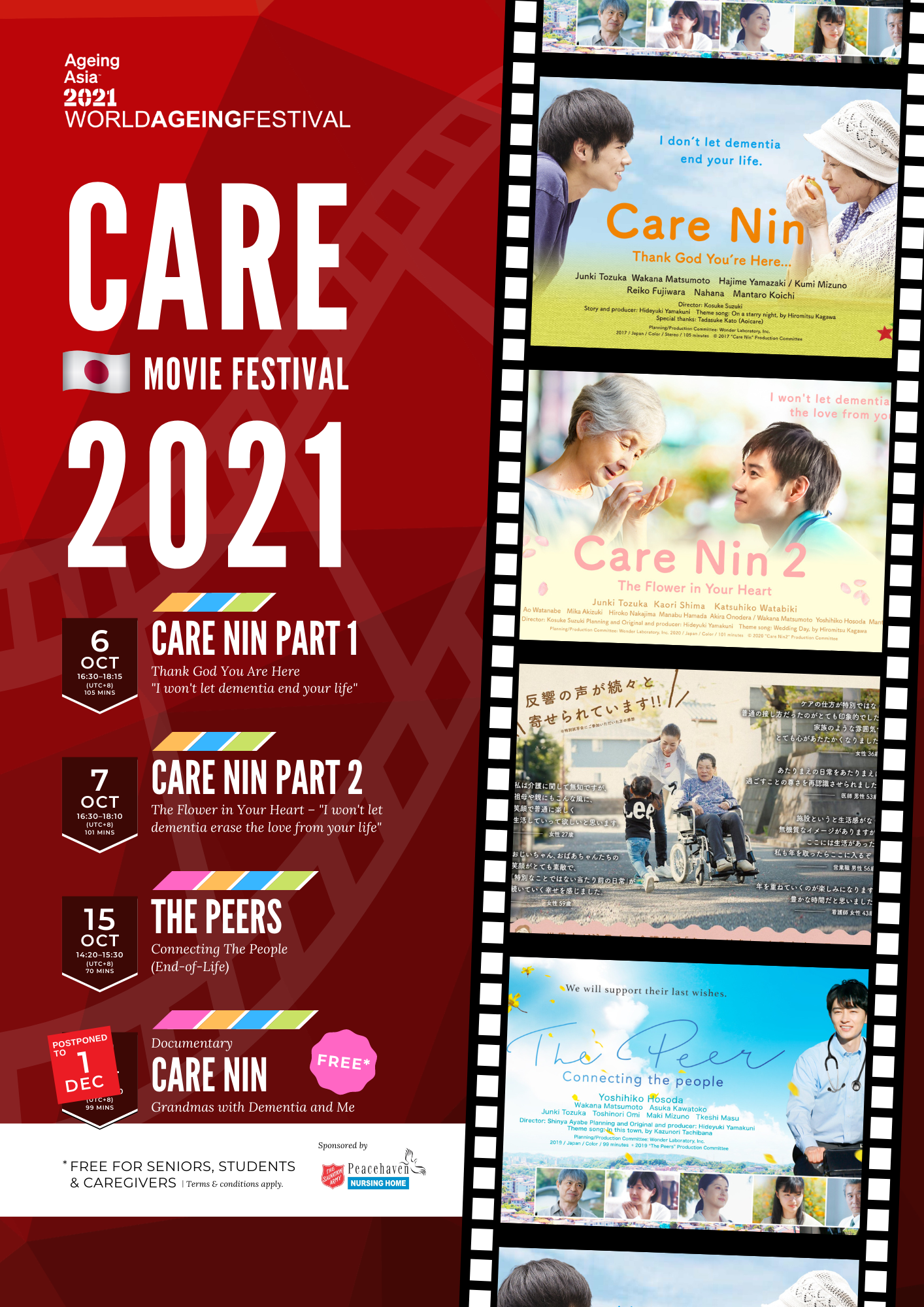 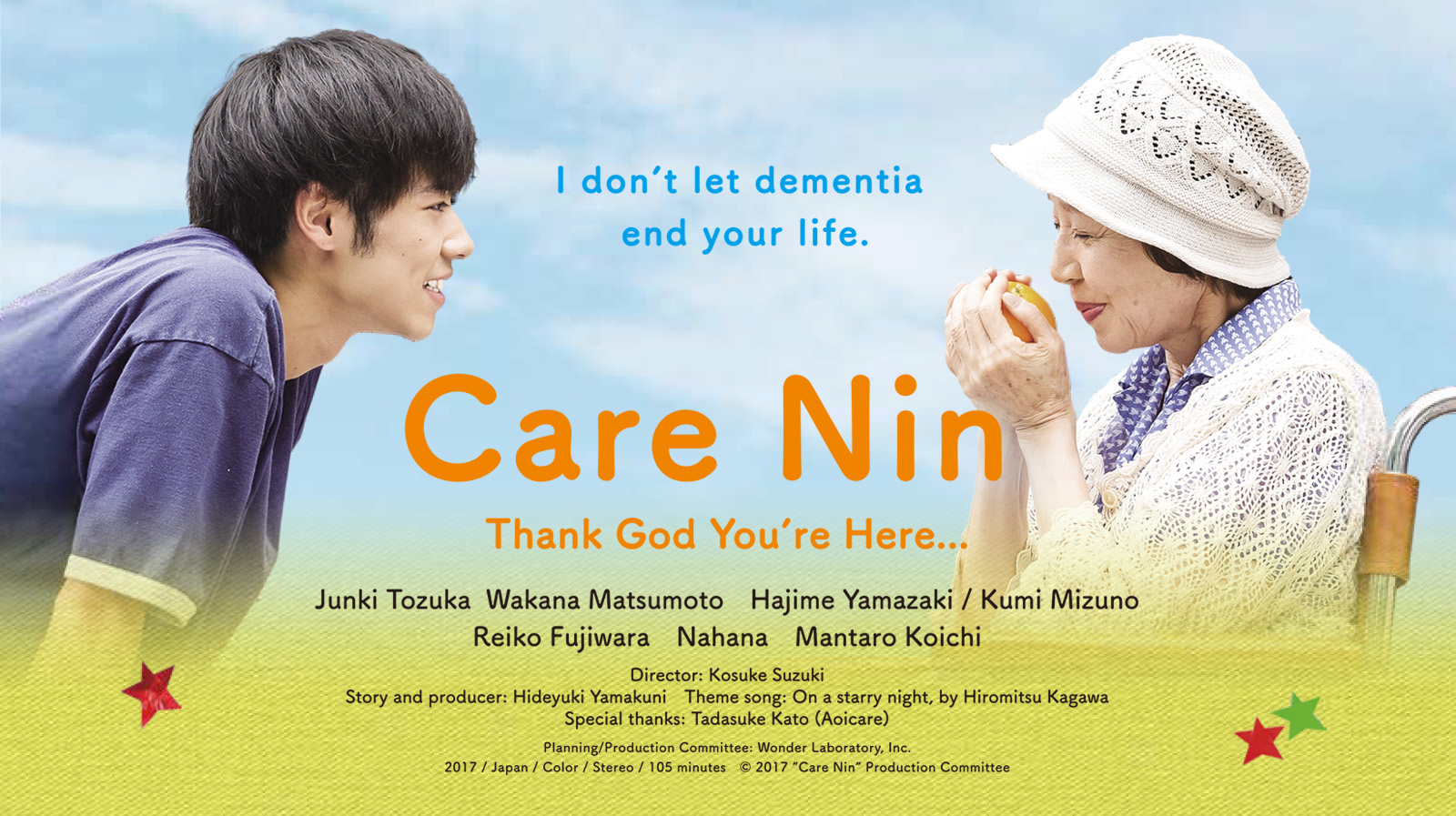 The story follows Kei Omori, 21, a rookie certified care worker as he begins his first job at a small-scale multi-functional facility in the suburbs, right after graduating from technical school for care work. Kei has always lived life without giving much thought to the future, unsure of the life ahead of him. However, it all changes once he is assigned as the main caregiver to Keiko Hoshikawa, a 79-year-old woman with dementia. Join him as he experiences the ups and downs of the caregiving profession through trial and error with support from his colleagues as gradually forms a stronger bond with Keiko.

The film Care Nin Thank God You're Here..[ The carer: I'm grateful that it was you] pieces together the stories shared by Otagai-san (Aoi Care Co., Ltd.) of Fujisawa City in Kanagawa Prefecture and 30 other care facilities, technical schools, and organisations. The film portrays the meaning of work that care workers find through their profession and the preciousness of the connection between people and the community. Every line in the film is a reflection of real experiences faced in the field of care work. 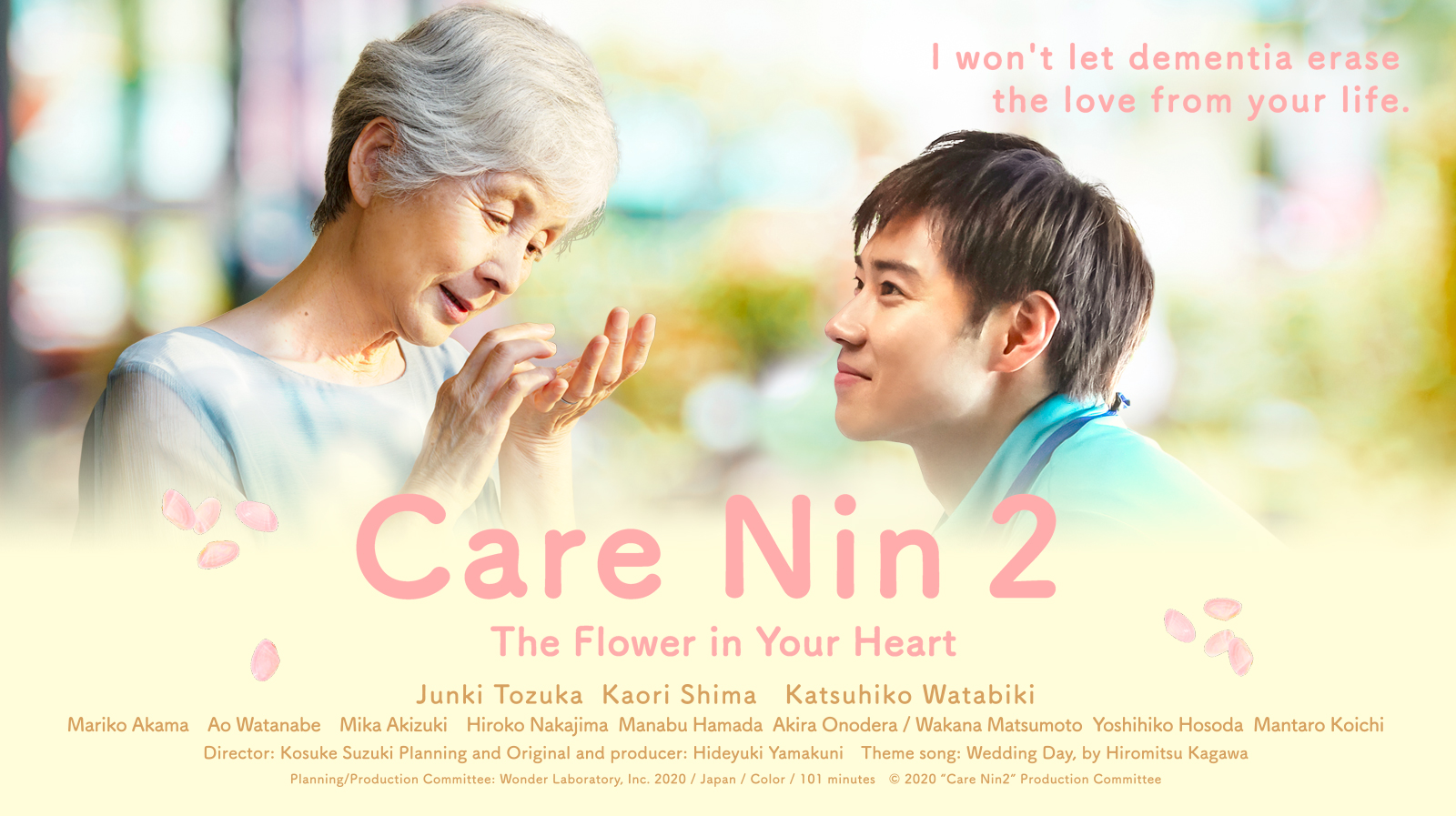 Kei Omori is a caregiver who has left his previous job at a small-scale care service to come work at a large-scale nursing home. But he is unable to hide his tremendous discomfort with a management style that prioritises efficiency and risk control in the name of accommodating large numbers of residents. It is under these circumstances that Mieko, an elderly woman living with dementia, moves into the nursing home. Mieko's husband, Tstsuro, has been acting as her at-home caregiver and doesn't trust the nursing home to watch over her properly. He is quite tough on Kei, who is Mieko's primary caregiver at the nursing home. But still, Kei tries his best for Mieko and the other residents. He even does things like getting a friend who works as a beautician to open an on-site salon for the residents. However these efforts lead to Kei being reprimanded by his more experienced colleagues and even the managing director of the nursing home for disrupting the teamwork among staff members at the nursing home. This situation gives Kei a chance to discover Tatsuro's true wish… The story begins just as protagonist Kei Omori, played by Junki Tozuka, leaves his previous job to begin working at a large-scale nursing home.

This nursing home is one of the largest care facilities in Japan. The work environment for a caregiver like Kei is entirely different here. This nursing home has numerous residents and many of them live with serious medical conditions. this is a second act filled with love and emotions, as Kei clashes with the other staff members as they all search for a way to make the residents and their families happy.. 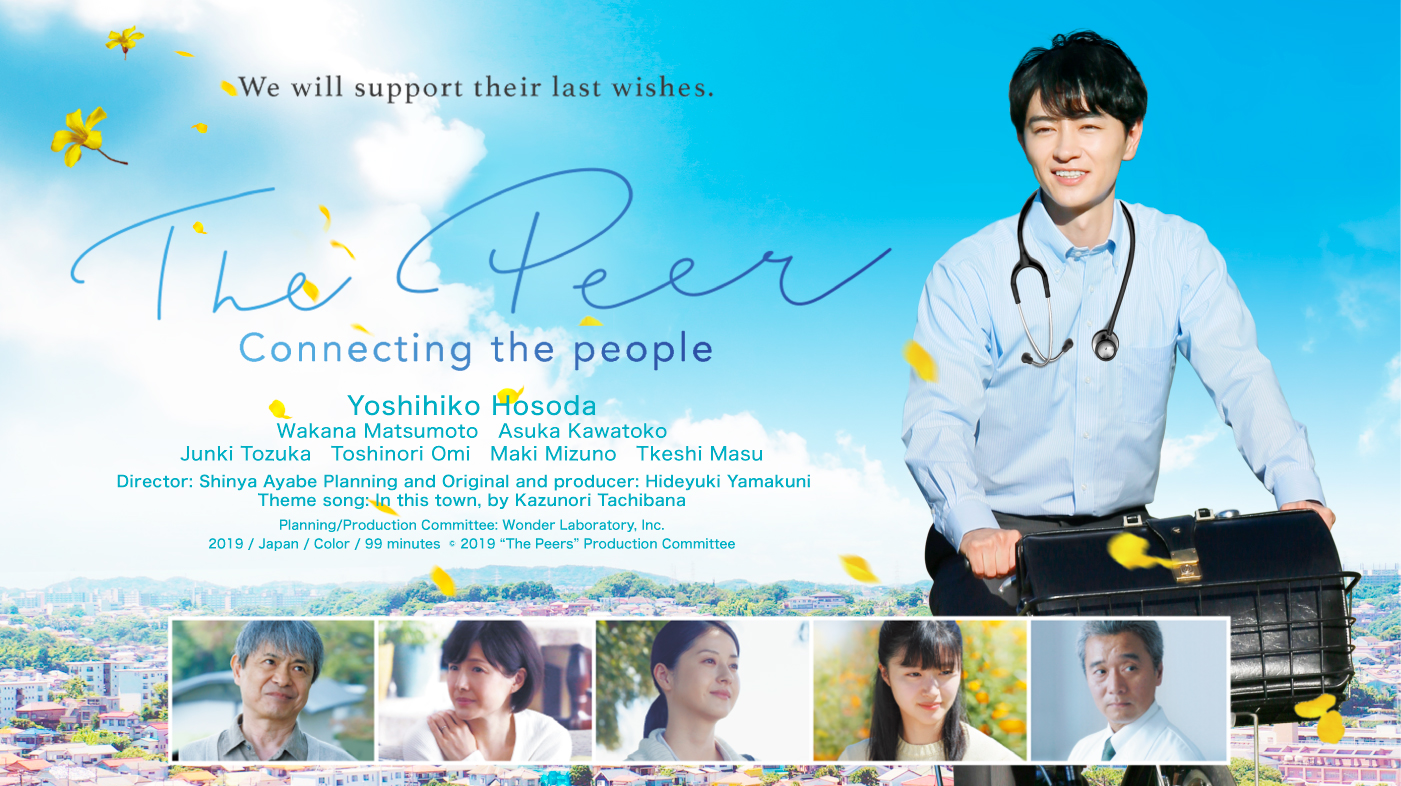 Story of life and hope – a young doctor and his peers who work diligently on home healthcare.

“We will provide healthcare at each patient’s favorite place so that they can live their own lives peacefully and happily until the end of their lives”.

Masato Takahashi, a young doctor, was forced to resign at a university hospital in order to succeed his ill father's clinic. He unwillingly agreed to his father's request to provide care visits in the region. However, it was hard for him to get interested in providing healthcare for the local patients and their families. He was a prideful doctor who did not cooperate the region the care manager, care worker or other specialists in the region, causing him to be isolated in his practice of healthcare in the region.

One day, he encountered a patient's family during a care visit which slowly changed his way of thinking little by little... An original story written based on interviews accumulated from many occasions and sites from various fields, mainly with doctors involved in home healthcare.

It depicts hard work in homecare, nursing, and attendance at a deathbed in growing stories centered on a young doctor and care manager working together along with various specialists such as a care worker, visiting nurse, pharmacist, dentist, dental hygienist, administrative dietitian, and rehabilitation specialist in cooperation with each other as a team. It is a touching and heart-warming story filled with laughter and tears, depicting the precious connections of the people and the region which will positively impact your life.. 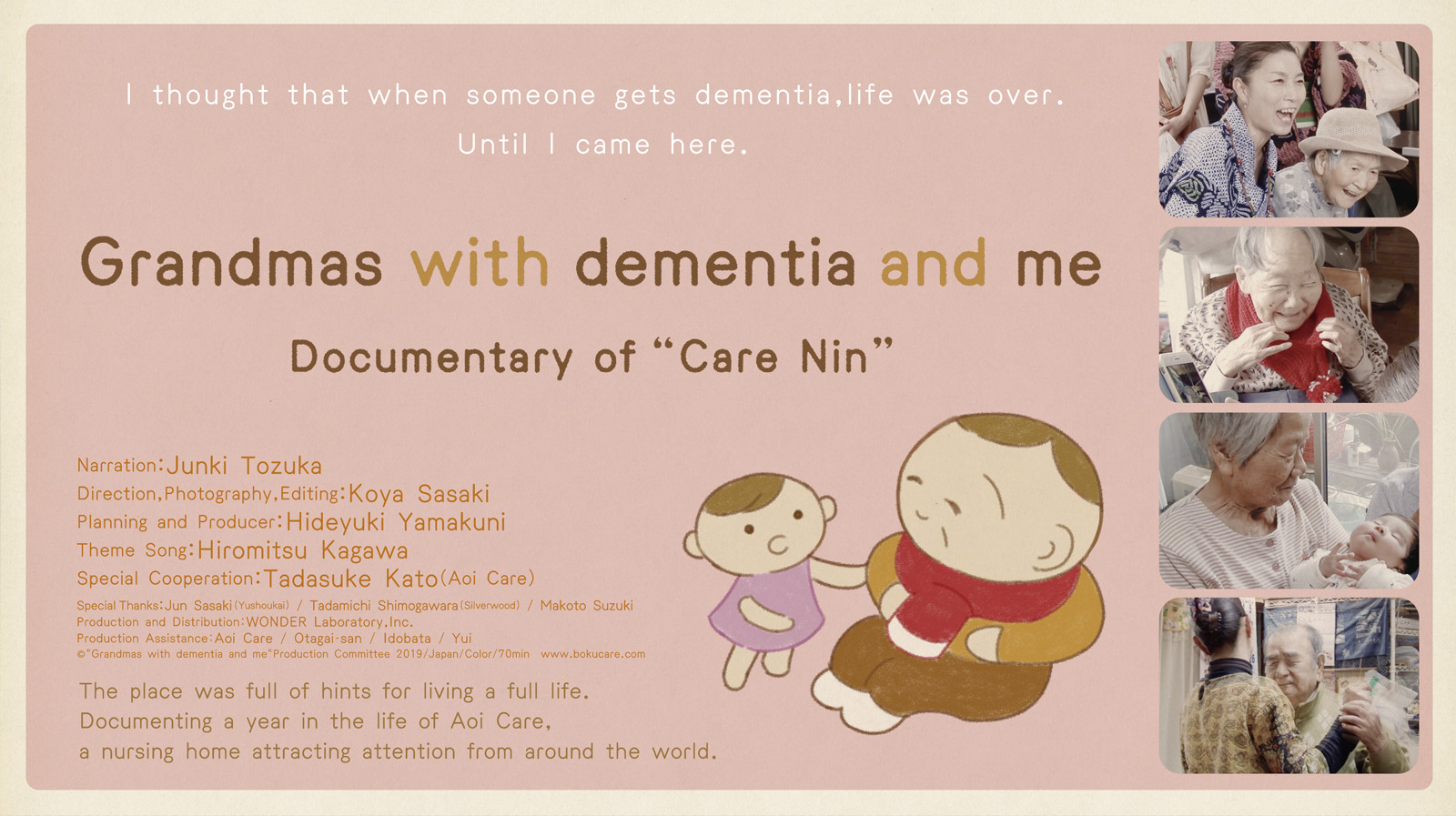 Aoi Care in Fujisawa City, Kanagawa Prefecture, is the most popular nursing home in Japan today, with a constant stream of visitors and news coverage from both Japan and abroad. The facility is always filled with the laughter of users and care staff, and everyone who visits says either, “I want to spend time here” or “I want to work here.” The Aoi Care style of independence-supporting care that helps people be themselves while living their lives is influencing many fields. It was also used as a model facility for the film, CareNin, Thank God You’re Here.

“Even with dementia, they cook, babysit, and fall in love” In this film, the director, who is the film’s first-person narrator, was asked by the producer to make a documentary about an amazing facility, and spent a year closely covering Aoi Care with camera in hand. The young documentary director, who was completely unfamiliar with nursing care, is at first surprised to see elderly people with dementia enjoying their lives, and later reveals the inner workings of the much-talked-about nursing home, as well as its secrets.

The film, which was made with in-depth coverage of the model facility over a shooting period of one year, can truly be called the “real-life version of CareNin.”

The story:I thought that when someone gets dementia,life was over. Until I came here. I had never been to a nursing home before, and I had never talked with anyone with dementia, so I wondered whether I could even make a documentary about this place. When I first came here, I was only looking for something special to find out what was so amazing about this facility. But after a year’s time, something had begun to change in me.... This is a precious one-year record of the smiling elderly people, the CareNin (care staff), and myself.

Download the high resolution posters to display at your facilities